For decades, youngsters have turned to the trusty roadside lemonade stand for a quick cash infusion when funds run low and the new issue of Superman is set to hit the local comic book shelves. As with everything else it seems, the world has changed dramatically. These days, by the time little Johnny or Suzie sells their first cup of the beverage, they’ve probably violated five different city ordinances and are in danger of being shut down by the local health department. It’s rough on a kid entrepreneur out there. Read on!

If you have a small business, and a lemonade stand certainly qualifies, you’re going to need the appropriate licenses. Expect it will take both a city and county license to operate legally, as well as a state retail license in order to collect and remit the proper sales tax. The little ones did intend to collect sales tax, right? Expect the state license to be free, but the first two will each set you back anywhere from $25 to $100 annually.

Did we mention the health department? Our friends in this local agency are likely to require a temporary restaurant permit to the tune of $100 or more. Plus anything that needs to be refrigerated (like lemonade) is likely to get you fined if you’re just relying on a pitcher full of ice and the shade of a beach umbrella.

Because if They Get Sick

In a litigious society like ours, parents should think long and hard about the legal concerns raised in selling anything for the public to consume. Old or bad lemon juice can cause food poisoning, so don’t be surprised if a customer decides to slap a big ‘ol lawsuit on the kids. You might want to consider immediate legal emancipation to keep yourself off the hook.

Getting Run Over and Worse

There is the obvious potential for roadside safety concerns! “Car accidents that occur on the shoulder of the road are very dangerous, and often deadly. In fact, of all fatal accidents in the nation in 2009, about 40 percent of them involved the shoulder of the road impact” (Abels & Annes). Cars stopped to score a cup of the sweet stuff could impede the normal flow of traffic, raising the risk of an accident. Likewise, a stand set up too close to the road could be plowed through by an inattentive driver. There are common sense solutions to this, like setting the stand up in the driveway and putting signage out by the road. Whether or not this will assuage the outraged conscience of local officials is anyone’s guess. 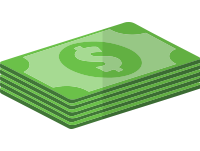 As a parent of a budding entrepreneur, your best bet is to check with the city before letting the kids spend too much time hammering together a stand and scraping up the ingredients for a refreshing pitcher of lemonade. Most stands make little enough money that they can mostly fly under the government’s radar. But this isn’t a foregone conclusion! We hope your kids will be successful in their money-making ventures. There is at least as much to learn from success as from failure. Either way, make sure your kids understand how to manage the money they earn. This venture, while potentially more difficult than you might expect, could provide a valuable teaching opportunity!

While some communities are eager to figure out a way to let the young ‘uns have a taste of capitalism, others seem intent to stamp out the idea entirely. Good luck and make sure that lemon juice hasn’t expired.